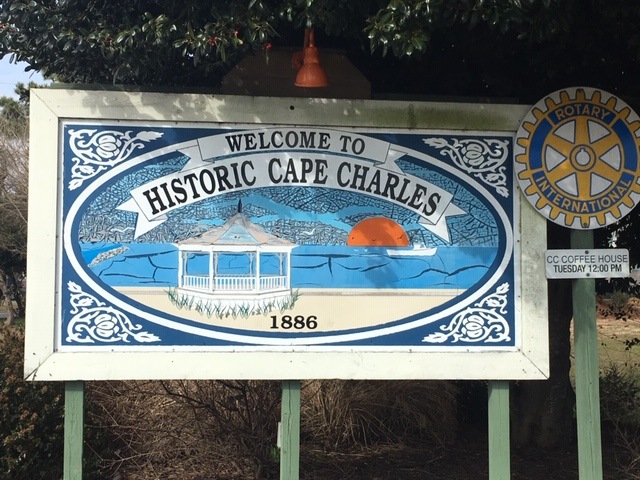 By Stefanie Jackson – The Cape Charles Historic District Review Board prevailed when the town council upheld the board’s decision to deny permission to paint a mural on the front of the historic Hotel Cape Charles on Mason Avenue.

The application was for creating “public art,” not “painting a building in the historic district,” according to Hotel Cape Charles owner David Gammino.

But the argument he made before town council members July 18 was not enough to change their minds, and they voted unanimously to uphold the historic district review board’s decision.

It was the first win for the historic district review board since the town council overturned four of the board’s decisions at a special meeting July 8.

All four of the denials that were reversed related to the construction or renovation of homes or related structures in the residential area of Cape Charles’ historic district.

But Gammino’s case was different. He proposed painting a mural on the front of a historic hotel on Mason Avenue, Cape Charles’ main street and commercial center.

Gammino said he was inspired by the Richmond Mural Project and the nearly 100 murals that appear on buildings throughout the city’s historic district. The murals can be viewed at https://richmondmuralproject.squarespace.com/murals-1

But one key difference is that most of the Richmond murals are painted on the sides of brick buildings, whereas the Hotel Cape Charles mural would have been front-facing.

Mayor Smitty Dize indicated that if the painting was for maintenance purposes, it would be acceptable, because the historic hotel was previously painted.

But the purpose of the project was not maintenance, but art.

Chairwoman Susan Eidam, of the historic district review board, said that public art is “completely incongruous” with the neighborhood.

If the town council had overruled the historic district review board on the Hotel Cape Charles, it wouldn’t have been the first time.

In 2013, the town council overruled the historic district review board’s decision to reject the balcony redesign at the hotel, according to a news report.

The work was performed without permission, and the historic district review board refused to grant a Certificate of Appropriateness for the project, which was required before obtaining a Certificate of Occupancy and opening the hotel for business.

At the latest town council meeting July 18, council members agreed that Cape Charles needs public art, but it doesn’t belong on the facade of a building that contributes to the town’s historic district.

Councilman Steve Bennett said a mural on the front of the hotel would be an “eyesore.”

Town Manager Larry DiRe recommended that Cape Charles enact a leash law, and he presented a draft of the proposed ordinance to the town council.

The law would require dogs to be walked on a leash or other physical restraint.

The language in the existing town ordinance that suggests dogs may be kept under control using voice commands is “arbitrary and capricious,” DiRe said.

Currently, dogs are permitted on Cape Charles’ public beach from the day after Labor Day to April 1, after 9 p.m. and before 9 a.m.

The new law would expand the times dogs are allowed on the beach – where they may run and play off-leash – to the day after Labor Day through May 1, after 9 p.m. and before 10 a.m.

The council planned to vote on the proposal at a special meeting Aug. 1.