The Northampton Agricultural County Fair, now in its fourth year, returns to Machipongo this weekend, with good, old-fashioned fun. Events will run Saturday, Oct. 5, from 10 a.m. until 2 p.m.

More than 1,000 people are expected to descend on the grounds of the former middle school in Machipongo for friendly competition and family friendly activities and exhibits.
Competitive events include a skillet throwing contest, a baking contest for pies and sweet potato biscuits, a roll-a-keg race, tractor races, and pumpkin painting.
The skillet-throwing event is a crowd favorite, said Northampton Chamber of Commerce Director Laura Dodson.

“It’s just something so unique,” she said of its appeal. “Anyone over age 18 can participate by signing up that morning.”

Baked entries must be delivered by 10:30 a.m. to the pie baking contest table with a list of ingredients, and the entrant’s name and phone number.

There are two competitive age groups: 12 and under, and adults.

Bakers can choose to make pecan, sweet potato, or apple pie. The more homemade ingredients used, the more points will be awarded.

Educational exhibits will include A & N Electric Cooperative’s Gaff-n-Go lineman demonstration and a demonstration by the Soil and Water Conservation District.

For a $10 wristband, children will be admitted to a zone with activities just for them. A bounce house, animal viewing area, face painting, a corn box in which children dig for objects, and a hay ride are just some of the events in this year’s lineup.

A photo opportunity with a mini pony dressed as a unicorn is sure to delight many young fairgoers.

The popular keg race has been moved to 12:15 p.m. this year. The race, which sees teams of four — two people in each direction —roll a 145-ound, water-filled keg down a straw-lined course. The change was made so the event “is right in the middle of the action,” said Dodson. “They definitely get competitive.”

Live music will be provided by Double Booked.

In the early part of the 20th century, county fairs were highly anticipated events. In 2016, the Northampton County Chamber of Commerce, the Virginia Cooperative Extension Service Virginia Farm Bureau’s Young Farmers, and the Northampton County Chamber of Commerce joined forces to bring a fall agricultural fair back to the Eastern Shore.
The first year saw some 700 participants and attendance has grown steadily each year.
“It’s definitely fun, mixed with education,” said Dodson. 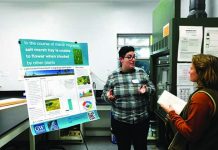