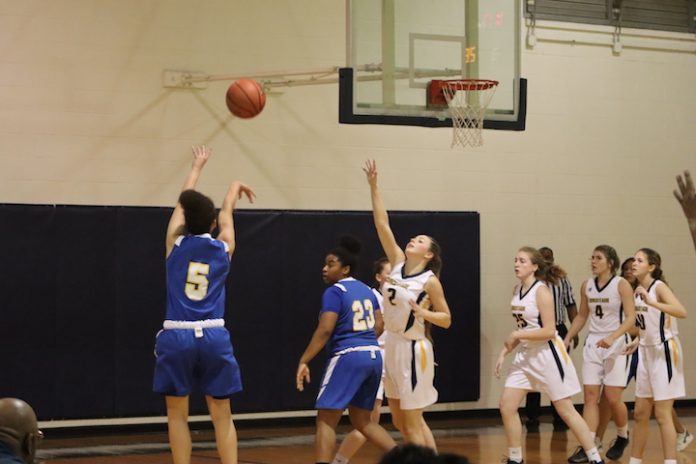 Northampton continued to run the table in league play with its 66-39 victory against Chincoteague Wednesday night. Chincoteague approached the contest with the game plan of double-teaming Northampton’s Maeyanna Delk, who often stood stationary near midcourt directing the 4 on 3 play in front of her. Against intense pressure, Delk still managed to score 8 in the first half. While Delk lingered in relative obscurity for a time, others stepped up in her place, namely Napria Brown and Brianna Bochman, who each notched 10 points in the first half.

The game was even after the first quarter at 12 apiece, but the Yellow Jackets started to run away in the second quarter, building a 13-point lead off a buzzer-beating 3-pointer from Jayden Jenkins.

Chincoteague moved to a zone defense in the second half but failed to effectively cut into Northampton’s lead. Bochman owned the close of the third quarter, knocking down a corner 3, stealing the ball at midcourt, and driving for a layup, followed by another layup and finally another 3-pointer in a blurring frenzy of activity. Bochman’s instant offense stretched the lead to 19. A pair of jumpers from Emma Jackson ended the flurry, but the Ponies found themselves down 15 headed into the fourth.

Northampton’s starters continued to tally points in the fourth, while Chincoteague rested many of its starters. Lindsay O’Shea hit a pair of foul-line jumpers for the Ponies, but the Yellow Jackets big three of Brown, Bochman, and Delk padded the stats sheet. Bochman finished as the game’s high scorer with 23 points, followed by Delk with 19 and Brown with a very solid 18.

Shelley led the Ponies with 11, and was joined in double figures by Jackson with 10.

Chincoteague coach Jimmy Bloxom was firm in his gameplan to slow Delk, a plan that served his team well if not for Northampton’s other starters stepping up with great accuracy.

“I’m not gonna let Delk beat me driving, hats off to them,” said Bloxom.

Earlier in the week, Chincoteague stepped out of league play to host the Lady Eagles from Holly Grove. That game resulted in a 37-21 win for the Ponies. Balance was the name of the game for Chincoteague in that contest. Nearly every player who saw action for the Ponies contributed to the final score, including Lola Watson, who moved up from the JV squad. Watson made a pair of shots, the second of which was a long baseline jumper in the pivotal second half.

Jackson played a strong all-around game for the Ponies, particularly in the third quarter, with blocks, steals, and rebounds, all the while diving hard to the court. Jackson also assisted Brianna Hess for a pair of shots late in the third quarter, and finally added points to her ledger with a layup.

For the Eagles, Mackenzie Schaffer returned to action, just weeks from a graphic shoulder injury that sidelined her in a previous matchup with the Ponies. Schaffer led Holly Grove with 5 points, while Shelley ended as the game’s high scorer with 9.