The 2019-20 wrestling season has come to a conclusion with teams from around the Shore competing in the state tournament last weekend. Nandua, Arcadia, and Northampton all traveled to Salem last weekend to compete in the tournament in their respected divisions. This year’s tournament was quite bountiful with several wrestlers placing and bringing home medals from the five-hour trip.

Northampton advanced four wrestlers to the Division I tournament in (113) Kevin Perez, (138) Wyatt Anderson, (145) Aizmani Joseph, and (220) Crescencio Sugia. The Jackets were close to having three medalists with Perez and Sugia being edged out just one match away from the medal round. Perez and Sugia went 2-2 in the tournament while Anderson went 1-2 gaining valuable experience. Aizimani Joseph had the Shore’s best showing across all division placing third overall. The sophomore lost only one match and got a major decision again Grundy’s Jacob Stiltner for his bronze medal. He finished his second season with a 42-8 record and an All-State standing for his efforts.

The Division II State Tournament was won by Region A powerhouse Poquoson High School for the second time in two years with 140 points. Strasburg finished in second with 106 points and James River rounded out third with 104 points. The Nandua Warriors made a splash on the state level as one of the top teams in Virginia by cracking into the top ten and tying for seventh place with Stuart Draft High School with 61 points. The Warriors made a name for themselves advancing eight wrestlers to the final dance with five Warriors taking the podium in Salem. Their seventh place finish is the best placement they’ve had since head coach Nathan Metzger took over the reins.

Their top performers include, (106) Collin Ford sixth place, (120) Matthew Taylor fifth place, (145) Cameron Mears sixth place, (160) Joseph Teasley fourth place, and (170) David Gastelum fourth place. (138) Dylan Ross was one match out from medaling, going 2-2 at the tourney. (126) Carlos Lopez and (285) George Stevens both rounded out the Nandua squad going 0-2 and gaining valuable experience to build on for next season.

Arcadia High School advanced three wrestlers to the Division II tourney and was led by (113) Angel Vasquez. Vasquez placed fifth overall after pinning Sam Pequignot of Madison County. The Firebirds (132) Osberto Perez went 2-2 at the tournament falling just short of the medal round.(126) Ronaldo Lopez was the Firebirds’ top finisher in the region but came up short at the state level going 0-2 in the tourney.

Broadwater Academy’s William Wehner took place in the VISAA State Wrestling Tournament held Feb. 14-15. The freshman is the only wrestler on the team traveling and competing alongside Northampton. He completed a 23-10 season and finished seventh overall after gaining a decision over Jeffrery Billings of Fishburne Military School. 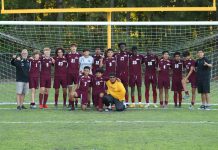