Story and Photos by Brennan Waldorf –
Broadwater’s bat continued to struggle at home as the team was shut out in back-to-back games, recording only one hit. Alex Brown hit the lone single in the game against Greenbrier.

Despite the bad losses, the strength of the Vikings’ schedule has Broadwater ranked in the top 10 as it looks to play the first team in its division this weekend. The first game against a Division III team will not be easy as the Vikings travel to Williamsburg Saturday, May 1. There they’ll play Walsingham Academy, the No. 1-ranked team in the division. 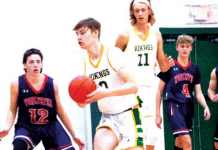